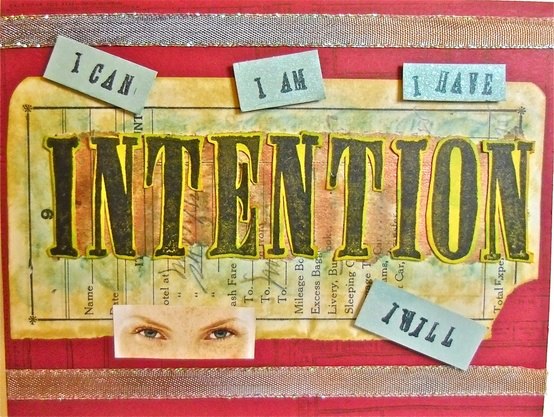 Now that the spring equinox is upon us, it’s a great time to review how your plans for the year are unfolding. Achieving your goals is all about staying on top of how things are going and adjusting as you need. I’ve covered some good practices for goal setting in previous posts (see Revolution Remix), but I want to make sure you are also using intention.

Jim Carrey has a great YouTube video on how we create our life through intention. It’s part of a great video series by Eckhart Tolle.

The power of intention is that you can use the principles of quantum physics to manifest the life you want to live. The process involves putting into writing statements about what you want to create. Also known as objectives, intentions have a certain form that makes them most powerful and there is a process for articulating them. All matter vibrates at a certain frequency and intentions utilize that resonance to create attraction.

An intention should begin with the words “I want” because that language is a very clear claiming of that which you want to call forth. Many of us have been taught not to use those words because it sounds “selfish” or “demanding” but in reality those words are pure and express a clear desire and resonance.

Next, the intention should state the end result of what you want to manifest. This is not a time to be wishy-washy — clarity is important! For me, I found this part challenging at first because I was not used to asking for what I wanted so I did a lot of sidestepping. I also had to learn to really think about the final outcome, and not one of the steps on its way.

For example, when I was single, I might write, “I want a boyfriend.” But that’s not really the final outcome is it? What I really wanted was to be in a committed, romantic, relationship with a wonderful person. I have dated plenty of people who were not able or willing to create the type of relationship I wanted.

Another example is about money. A lot of people have an objective to earn more money but is that really the final outcome? Isn’t the outcome some version of having abundant resources to do the things you want to do? A salary is one channel but there are many ways resources can come to you, and some of which you don’t have to work to earn. If you wanted to travel, one way to do that would be through money but another way might be receiving the gift of use of a friend’s vacation home, or an unexpected work opportunity where your travel goals can be added on to the expenses the company is paying for.

Thinking of the outcome can help you expand the potential opportunities for receiving it. Only our minds get limited in conceiving possibilities, but the universe has many creative ways for bringing you what you desire.

The intention should end with the phrase “so that I feel/have/be/do…” in order to articulate what you really want to accomplish. This is different from the request, which is the physical form of what you want. The ultimate desire is what that request will give you.

This section of the intention writing always makes me pause and gain some clarity about what is at the heart of my intention. What is it that you are ultimately trying to achieve? Usually it is a feeling like love, or happiness, or serenity. As I work through this part, I sometimes rework Step 2 because there are often many physical forms that could work.

The written format for an intention or objective is:

Here are some examples of unclear objectives and then powerful versions. Note that things need to be phrased in the positive:

Besides having intentions for your personal life, you can also have some for your community, state, country and the world.

When an intention is right, it feels powerful. It’s a resounding “YES! That’s what I want!” So read over your intentions and keep tinkering with them until they feel absolutely right on. It’s important to focus on the feelings because that creates a certain tone or resonance for your intention, and that helps magnetize the forces of the universe (the quantum physics part) to move it into reality.

Repeat as needed. Every year, I set 10-20 every intentions – there is no limit to how many you can have. I often look at the areas of the Wheel of Wellbeing for guidance so that I know that I am holistic in my intentions.