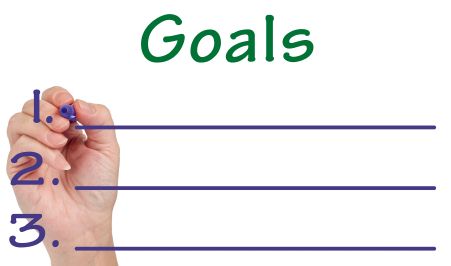 So it’s the beginning of February and I thought I would check in on how your New Year’s Resolutions are coming along. By this time, you have either gotten into a groove or you may have lost your way. If you’re in the groove, good for you! Keep it going!

If, like many people, you are stumbling, take heart. It’s never too late to turn it around! In fact, it’s better to reconnoiter now, than wait until 2014. Changing behavior always takes a little time because you are essentially breaking old habits and establishing new ones.

One of the tools you can utilize you to support you is goal setting. Goal setting is a way for a person to clearly state what she or he wants to achieve; it creates focus and direction, and inevitably guides thoughts, actions, and behaviors. However, goal setting can be a bit more complex than most of us think. It is easy to say, “I will lose weight” but this statement lacks many things that are essential to good goal setting and ultimately, the success of achieving them.

The goal needs to be very specific so that it is clearly defined and achievable. For example, the goal “I will be thinner by summer” is too general. What does thinner mean to you? When, exactly, is summer? A specific goal would be “I will lose a half-inch each from my waist and thighs by June.” Another example of a general goal might be “I will get involved in my community.” A better goal would be “During February and March, I will attend three meetings of community organizations and join the one I like most.” This is much more specific, and it will be easier to recognize whether you are on track. Try to include information on who, what, where, how, and why.

This quality also has to do with specificity and reflects how you know whether you have achieved the goal or not. The goal “I will feel better about myself” is not measurable. By what criteria can you measure that? You need to set goals that have some kind of measurable benchmark. These might be inherently available in the goal (e.g., pounds, dollars), or you might have to create a benchmark, such as a scale of 1 to 10. For example, “On a scale of 1 to 10, I’m currently at a 3 in terms of liking myself. I will rise to the level of 6 by the end of June.”

This is the quality that empowers you to be in control. Set goals that allow you to take some specific actions to achieve them. The goal “I want to be liked by more people” is not action-oriented; it is based on the actions of others. However, the goal “I will meet at least ten new people by the end of May” is action-oriented, as is the goal “I will ask my friends two things I can do in order to be a better friend to them.” You want your goals to have some action in them so that you can be proactive in achieving them.

This is especially important to remember in relationships. You cannot control the behavior of others, so having a goal of getting more flowers from your boyfriend is not a good idea. However, you certainly can set a goal for telling him that flowers are important to you and for requesting that he give you flowers more often. You can even have a goal regarding how you will handle the situation if he does not honor your request, including buying yourself flowers at least once per month. These are all the things for which you can control the action.

It’s very important that goals be realistic; otherwise, you set yourself up for failure. While you might wish to lose 20 pounds in 2 weeks, this is not a realistic goal. You also have to be able to envision yourself accomplishing the goal and believing that you can do it—otherwise, you won’t.

This is where you address the “when” of your goal. Each goal needs to have a target date for completion; otherwise, it is too easy to put it off. It’s important to get specific about when you will accomplish something because this holds you accountable for taking action. However, it’s also important to be realistic about the time frame—setting the deadline too far away will not be very motivating, and too close can be discouraging.

Once you have a clear goal that has all of the SMART qualities, break each goal into smaller steps that will lead to the achievement of that goal. Each smaller step should also have a specific deadline, and the smaller steps should lead to accomplishing the SMART goal by its stated time frame. For example, if your goal is to lose 20 pounds in six months, a reasonable goal, some specific smaller steps might include:

You will want to set a series of smaller steps that, over time, will lead you to achieve your goal. It’s also good to use these as milestones along to the way so you can adjust if you are not on track.

Goals are different from objectives or intentions, which are also very valuable tools in personal transformation. Read more about them in the Intention section of the Wellness Toolbox.