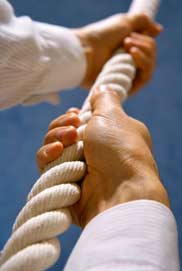 When I was in the training for my Life Coach certification, I heard this one tale that really left an impression on me. It’s called The Fable of the Bridge and I share it with you now.

The fable begins with a man wrestling with his own thoughts about his future and what choices he wants to make about his life.

After much contemplation, he achieves great clarity and is excited about the vision he can see for his life. He starts off on the journey to his future.

He must travel to another town where an amazing opportunity has presented itself but he must get there by the next morning or the opportunity will pass.

He travels many hours, each step getting more excited about the life he is creating. As the full moon rises, he is alone in his thoughts as he starts crossing a bridge.

The man sees out of the corner of his eye a stranger coming towards him. He thinks the man approaching is putting his hand out to greet him. However, the stranger has the end of a rope in his hand with the other end wound around his waist.

The stranger asks the man to hold the end of the rope. Although perplexed, the man complies.

The stranger asks the man to hold on tight with two hands and then promptly jumps off the bridge toward the swift running deep river below. “Hold on!” the stranger cries.

The free-falling body hurtled the distance of the rope’s length, and from the bridge the man abruptly felt the pull. He held tight despite being almost pulled over the side of the bridge.

Peering down at the stranger who was close to oblivion, the man yelled, “What are you trying to do?”

“Just hold tight,” said the other.

The man tried to haul the stranger in but he could not. He could not get enough leverage. His strength was almost perfectly counterbalanced by the other man’s weight.

“But I cannot pull you up,” the man cried. “Just hold on. I need you,” the stranger yells.

The man looked around for help, but no one was near. The man holds on for a while, and then calls, “Please, I cannot hold you. Please climb up.”

“I am your responsibility,” said the other. “Well, I did not ask for it,” the man said. The stranger cried, “If you let go, I am lost.”

The man tried to invent solutions, like tying the rope to the bridge, but could not find any that would work.

Fearing that his arms could not hold out much longer, he tied the rope around his waist.

He thought if he just waited long enough, someone was bound to come and help pull the stranger up. He waited many hours, but no one came.

“Why did you do this?” he asked again. “Don’t you see what you have done? What possible purpose could you have had in mind?”

“Just remember,” said the other, “my life is in your hands.”

Time passed and a decision needed to be made. The man could not hold on much longer.

A thought occurred to him. If the stranger hauled himself up and he kept the end steady and pulled a bit, together they could get the stranger back to safety.

“You mean you won’t help? But I told you I cannot pull you up myself, and I don’t think I can hang on much longer either.” “You must try,” the other shouted back in tears. “If you fail, I die.”

“What do you mean?” the other asked, afraid.

“I mean, simply, it’s up to you. You decide which way this ends. I will help you if you help yourself.”

“You cannot mean what you say,” the other shrieked. “You would not be so selfish. I am your responsibility. What could be so important that you would let someone die? Do not do this to me.”

The man stated again, “I will not stand here and hold this rope. If you want to live, you must start moving now, and I will help you. Please, start now.”

He waited a few minutes, but there was no change in the tension of the rope. “I accept your choice,” the man said, at last, and freed his hands.

By the late Rabbi Edwin Friedman