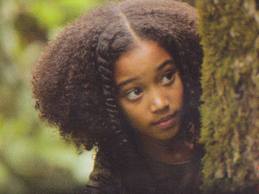 The Hunger Games movie is out and is experiencing its expected blockbuster success after the books were national bestsellers. While it’s a work of “fiction” I believe that any work that achieves a certain level of popularity does so because it resonates on a core level with a wide portion of society. These works are essentially a mirror back to us about who we are as a community.

And I must say that I am deeply humbled by what the reaction to this movie tells us about ourselves. There is a huge racial backlash by some Whites about the casting of this movie because some of the favorite characters are Black actors, even though they were written as such (read more). Many of the posts and tweets are saying that the “good” people should not be Black. Another states that the death of one beloved character was “not so bad” in the movie because the actor was Black and many posts could serve as an admission ticket to the KKK. Really?! I mean, c’mon people!

While this makes me angry, more than anything, it makes me sad. The kind of racism the casting elicited showed me how deeply wounded we still are as a society.

Maybe this is a good reminder to us all of how far we have to go. While we certainly have made great strides in the 40 years since the Civil Rights Movement, there is clearly a huge racial divide in this country that cannot be covered up with arrival of a Black Disney princess or the election of a President who is biracial. And let’s not forget what other races, people with disabilities, non-Christians, and lesbian/gay/bisexual/transgender people endure on a daily basis in this country. If those posts indicate what people are still feeling, thinking, and willing to put in writing in 2012, then we have only barely begun the journey to being a society based on equality and freedom.

And don’t even get me started about the disparity between the have and have-nots in the story. The Occupy movement is alive and well in this country because that kind of disparity is currently on display in every neighborhood as is the use of police/peacekeepers to protect the interests of the wealthy.

How does this all relate to Soul School and the Wheel of Wellbeing? Well, who we are as a community is directly related to who we are as individuals and the kinds of relationships we are able to form with others. The health of our society is directly sourced from the health of each person within it, as our ability to be loving and open-hearted comes from our own sense of well-being and happiness.

Some questions to consider:

For the record, I apologize to all People of Color who have to endure ignorant and hateful comments, and worse, emotional and physical brutality. It is not acceptable to me that you are being treated this way and I take a stand against it.

Being a healthy community is a group effort and we all have a very important part to play. Please play yours.